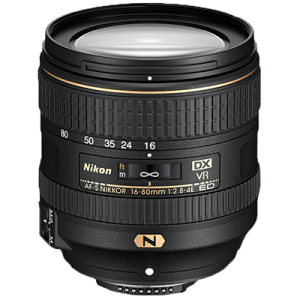 Overall the build quality feels very good. The lens features a rubber gasket at the lens mount and feels like it may have some gasketing in the lens barrel extension, but I was unable to confirm this. Zoomed out, there is a little play in the lens barrel extension, but nothing to worry about. The zoom ring does feel fairly well damped and even throughout the range. The focus ring has a pretty short throw and a slight amount of play which can make manual focusing a little challenging. Nikon has thrown a lot of technology at this lens to help it’s performance (From Nikon USA’s website): The lens does fall off rather quickly to the f/4 aperture, maintaining f/2.8 only from 16-22mm. Check out the max aperture ranges below:

Wide open the lens is a little soft, but not any softer than I would expect since most lenses perform this way. Stopping down improves sharpness until around f/11 where diffraction starts to take it’s toll. Overall this lens gives a decent performance and is a step up from the consumer and even the prosumer lens options currently available.

The lens does vignette quite heavily wide open, but stopping down helps to remedy the situation. By designing the lens with a 72mm filter thread this helps the situation vs if they used the more standard 67mm filter threads. Unfortunately this means if you decide to pair this lens with the excellent 70-200mm f/4 or the 70-200mm f/2.8 lens you will be carrying 2 different filter sets. This is one thing that is a little bit of a pet peeve for me, I wish the camera manufacturers would design a lens set that uses the same filter threads throughout a given set of lenses that they expect a photographer to own. They typically do this with the professional lenses such as the 16-35mm f/4. the 24-70mm f/2.8 (Not including the newest VR version of this lens) and the 70-200mm f/2.8. But unfortunately Nikon is bound by physics and as a result they have to use a larger diameter to help with the lens performance. The vignetting can be seen in the distortion samples above.

The lens does have some pretty heavy pincushion at the widest focal lengths, requiring a +18 in Lightroom to fix. It seems to even out around 24mm then changes to minor pincushion throughout the rest of the focal range requiring -3 to -6 correction in Lightroom (click to view larger):

I like that this lens has a faster max aperture of f/2.8-4.0 vs f/3.5-5.6 for the older AF-S 16-85mm lens. I also like the unique squared off lens shade as it seems to offer better efficiency at blocking stray light from causing flare. The build quality is quite good and autofocus performance is quick.

First of all, I think the price is a little on the high side. I would have preferred to see the lens retail for around $799 instead of over $1000. I also wish it had a 67mm filter thread to match up with the awesome Nikon AF-S 70-200mm f/4 VR. I also wish it was weather sealed.

This lens will surely be a popular lens choice for serious amateurs and pros shooting the Nikon APS-C (DX) format who want to stick with genuine Nikkor glass on their Nikon bodies. While the initial price is a little bit expensive for a variable aperture zoom, there are not a lot of options out there for DX standard zoom lenses with an f/2.8 starting aperture. Sigma does make a similar lens in the 17-70 f/2.8-f/4 that typically tests very well, but that lens is significantly less expensive than the Nikon (about 60% less!). Additionally, both Sigma and Tamron offer 17-50mm f/2.8 constant aperture lenses that are also about 40% less than the Nikon. The build quality of the Nikon is a step up from the Tamron (I haven’t used the Sigma) and the Autofocus is faster and offers full time manual override, but the question of the day is does the Nikon justify the extra cost? For some users, the answer is a resounding “yes” but for those that are a little more budget conscientious the Sigma and Tamron offerings are quite a bit less money and hard to justify the higher price. Like most things, you pay a lot more for a little better performance. The Nikon is a very compelling offering and it is good to see Nikon showing some DX lens love again.

Not sure if this lens is for you? Try it before you buy it! Rent from borrowlenses.com!

based on 140 user reviews online.