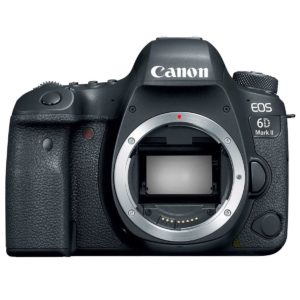 Canon has announced the long awaited follow up to their entry level full frame EOS 6D body with the new Canon EOS 6D Mark II. The major updates are a 26.2 megapixel full frame sensor, 45-piont autofocus and a fully articulated 3″ LCD screen that is now also touch sensitive. The new 6D MkII also adds NFC for transferring images with Android phones and other devices that support NFC. Sadly, the iOS does not support NFC for anything other than Apple Pay.

Of course many video fans are complaining that the EOS 6D Mark II does not feature 4k video recording, but Canon did improve the video to now support 1080 @ 60P, which is an improvement over the original 6D.

Having previously owned the Canon 6D, most of the updates I see as very welcome, but probably the most exciting for me would be the articulated touch LCD screen. This is a feature I sorely missed from my Canon EOS 70D. I didn’t use the screen to compose shots very often, but it was nice to have, but my favorite part of the articulated LCD was the ability to close the screen when not in use. This affords a level of protection from scratches and breaking that I really like and miss with my D750.

The Canon EOS 6D II is one of the most under-rated cameras in 2018. There was a lot of initial complaints of lack of dynamic range when compared to some of it’s competitors, and of course the lack of 4k video. However, it is still an excellent camera with a lot of features that other cameras don’t have such as the fully articulated LCD screen and Built-in GPS.

based on 627 user reviews online.